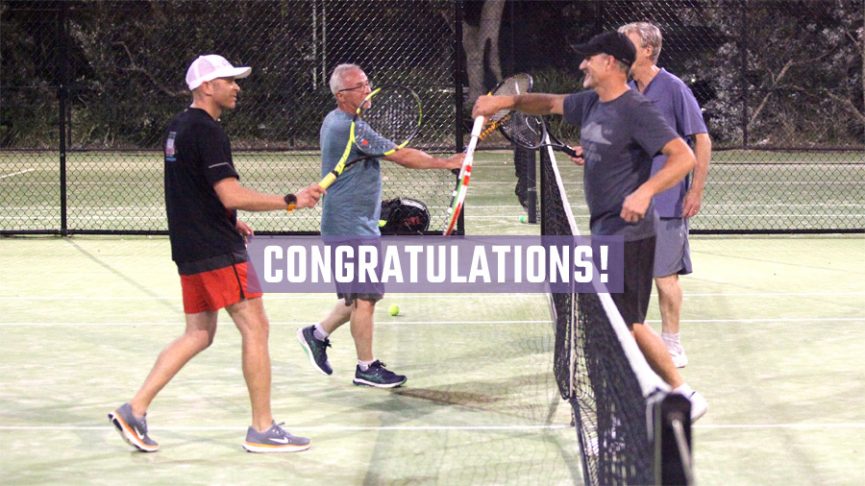 The final was a result of a Round Robin event – saw Scott Mitchell & Peter Gummer up against Nico Beauvillian de Montreuil & Ed Bellomo, who were very clearly the two best teams after the preliminary rounds.

Scott & Peter had beaten Nico & Ed only by 7 games to 5 in an earlier match, with much anticipation by many for the replay. It was going to be the brick wall of Scott and the slicing of Peter vs. the fleet-footed Nico and the wily terrier Ed.

Both teams had a player with remarkable previous finals appearances in this championship event. Peter’s first finals appearance was in 2005 and overall, Peter had been a winner twice and finalist (there are no losers on Wednesday night tennis at Collaroy) on four other occasions. Outstanding experience and resilience/endurance by Peter.

Ed first appeared in a final in 2011, being a winner twice and the last one in 2019. Thus, he was a defending champion and was undefeated in finals of this event.

The 2020 final started with four nervous players, all losing their first serves. Ed served 4th and was not going to give his serve up easily – points going for 7 or 8 deuces, both teams with about even game points until Scott & Peter levelled the match at 2-games all. Fortunes and play then changed dramatically and unexpectedly. Scott & Peter elevated their standard of play and had their opponents under pressure which forced some errors. There were still many exciting rallies and some marvelous high light shots from all players. Ed’s 180 degree across the court volley was memorable as was Scott’s consistent pinpoint back of the line returns.

Scott & Peter became more ruthless as the match progressed and did not allow Nico & Ed any easy points. Scott & Peter ran out winners 7 games to 2 but the match was much closer than the scores indicated.

My thanks to all competitors and to Wil, our Club Captain, for his photography.