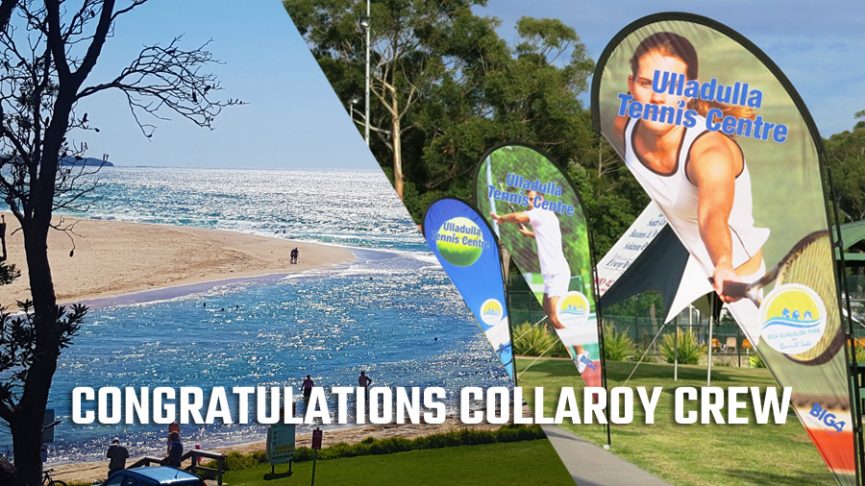 On the weekend of 18-20 February, a courageous contingent from Collaroy Tennis Club ventured south to take on all-comers in the Milton-Ulladulla Summer Games Seniors Tournament.

This year, the tournament attracted the largest number of competitors ever registered – around 250 players aged from 30 through to the oldest competitor at 90 years old, who played singles! (No… he wasn’t one of ours.)

The Collaroy Crew was led by Lynne and Clarrie Bridges and also included Garry Matthew-Stubbs and Julie King, Ros Ode, Eri Fawcett, Dave Keogh, Simone Sabadina and Brendan Jack. They joined players from other TNB clubs including Allambie and Bayview.

In true Collaroy fashion, our Team produced some excellent performances, highlighted by:

Brendan and Simone were also Runners Up in the Combined Age Mixed Doubles – 110, while Brendan also took 2nd prize in the 45-55 Men’s Doubles with partner Greg Rogan (Bayview). Simone and Ros were narrowly beaten into 2nd place by Lynne and her partner in the Combined Age Ladies Doubles – 120. That’s a total of nearly $400 in prizemoney to the Collaroy Crew alone!

High praise to Simone, who showed true grit and team spirit, playing the entire tournament with a calf muscle tear. A mix of medications supplied by Ros and Dave respectively, helped her see through an arduous campaign. Strangely, after completing all playing commitments, Simone tried to add to her winnings by ‘accidentally borrowing’ the envelope that contained Eri’s prizemoney… but her honest mistake was eventually corrected and attributed to the aforesaid medication.

A special mention to Garry, who played in no less than four events (morning and afternoon on both Saturday and Sunday) and improved his game with every match as he became increasingly ‘tournament tough’. (One to watch in the future for sure!)

Apart from the great tennis in perfect weather conditions over both days, the gang also led the social scene in Ulladulla over the weekend, packing out a beautiful restaurant overlooking the Harbour on Saturday night, sipping margaritas and telling tall tales from the day’s play.

Other activities included a spot of fishing from the Harbour breakwall, a seafood feast on Sunday evening (not as a result of the fishing expedition!) and swimming at beautiful Dolphin Point where the ocean pours into Burrill Lake.

In all, it was just a great weekend away. Hopefully even more members will come on tour to the next event.

2 Comments on “The Collaroy Crew in Ulladulla”