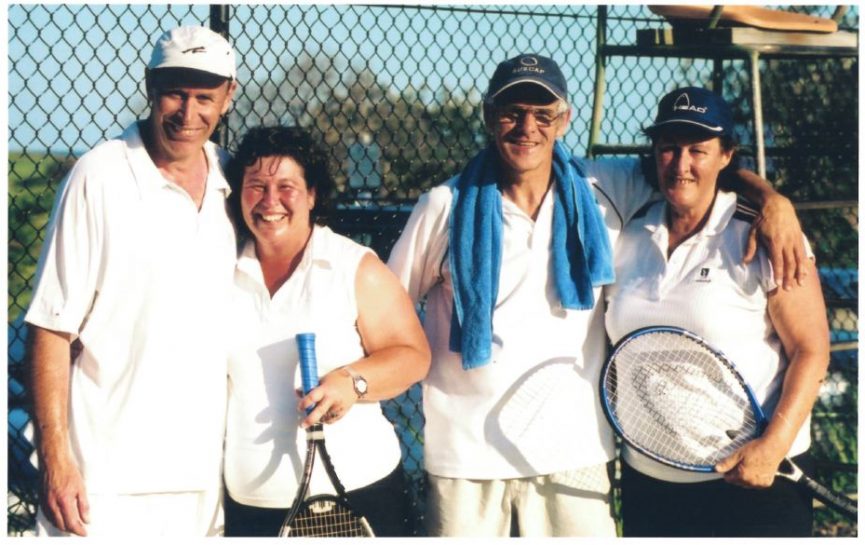 Still a Club member to this day, Ros Ode has one of the longest associations of anyone with Collaroy T.C. Her mother, Joan Gilroy and father Ernie Ode were both members of the Club before they married in 1941. And their three daughters Carolyn, Varelle and Ros all grew up playing at the Club.

Both Joan and Ernie were A-Graders and played in all the District competitions. Thanks to Joan and her doubles partner Betty Hall, Collaroy gained a reputation for serving the best afternoon teas on Comp. Days of any club in the MWTA. Joan and Ernie also managed the Interdistrict teams in which their daughters represented Manly, Varelle a member of the winning Irene Matthews Cup team in 1960. (She went on to play the New Zealand tournament circuit and even qualified for Wimbledon!)

Along with George White and Arthur Powell, Ernie ran the coaching at Collaroy for nearly 30 years and was also the court curator (remember, these were loam courts back then). At age 14, Ros won the CTC Ladies Singles, the Ladies Doubles and the Mixed Doubles with her dad! These were the first of many Junior and Senior Club Titles Ros has collected over the years.

She became a hitting partner for a young Dianne Fromholtz (now Balestrat), while sister Varelle was asked to hit with an emerging youngster named John Alexander. After marrying, Ros moved to play tennis in the Northern Suburbs for 20 years before returning to Collaroy in 1993.

Among many fond memories of the Club, Ros recalls the dances held in the clubhouse with first Roy Chapman playing piano and later a record player and tape deck supplying the backing track for everything from ‘The Pride of Erin’ to Barn Dances. Parents would bed down their small children in the back of station wagons and take turns to make regular checks on them throughout the evening – the kids having as much fun as mum and dad.

“In the late 1960s, tennis at Collaroy was thriving”, says Ros. “While there were still only three courts, the Club fielded 17 teams in district comps. Back then, hiring backyard courts (including one owned by Kevin Fox in Pacific Parade, Dee Why) and other venues like the War Vets on Collaroy Plateau and courts at the Narrabeen Fitness Camp.

“The Club’s juniors had a great time away from tennis too, regularly heading to nights out in Manly and further afield to Luna Park, The African Lion Safari near Warragamba Dam and our favourite, the Sydney Showground Speedway. As the oldest among us, Bob Silversides and Bob Noakes were in charge.”

Collaroy Tennis Club has always been a friendly place to play… a family club with a proud legacy. Ros’s daughter Alana won all six events in the Junior District Championships in 1996. Kev Fox’s son Ian won a District Championship. The granddaughter of another member, Bryan O’Connor is Bryanne Stewart who went on to play the WTA circuit, often partnering Sam Stosur in doubles.

To this day, many families with long histories at the Club continue to play at Collaroy – families like the Burkes, Bridges, Fletchers, Laytons and Petiths. Ros is still a member and continues to play at the Club, as does Clarrie Bridges and wife Lynne. Ros and Clarrie won the Girls and Boys Singles Club Championships respectively back in 1968! It’s a club for life.